One of our teenagers favorite shows is the Big Bang Theory. She has watches so many episodes that the four scientists wit has woven into her own. I really need to write some of the exchanges we have down as I can’t remember them all. So here it goes…

During the post-holiday recap driving home from swim practice one day, Bailie commented that Bill is grumpy lately. I didn’t really commiserate with her. Instead I prompts her to explain. What is boils down to is that Bill is no longer as attentive to her needs as he once was. He doesn’t jump every time she says “I’m hungry” or unload the dishwasher when it is on her chore list. She was quiet for about 30 seconds and flatly stated:

“I should have had him sign a roommate contract.”

Every fall the world normalizes in our household. One may guess that is due to the return of school and the daily routine refresh a new year provides. But not in our household. Rather it is the return to the pool after the prior season ended in late July. And this year was an exceptional return. She was already moved up in March, so she entered the pool knowing the coach and expectations, plus she felt like a more competitive member of the group. And with the move this summer, and the new school, it was great to have the comfort of both the pool and the coach.

As a side note, I expect next year to remain somewhat the same. However, she plans to swim high school which means only two to three weeks without pool time as she will start mid-August.

As Labor Day weekend loomed, the nervousness for the first day of school was hard to keep under wraps. To prepare over the last week, Bailie had:

At the end of the long weekend, the bus schedule and route number was memorized, the location to meet her friends programming in her brain and her first day of school breakfast needs identified. It was time for bed.

And before she knew it the sun was up, she was ready to go with a full belly. In a few short hours, all the angst was gone. The nerves faded. And she fully enjoyed her first day at her new school. She was full of how great the day was, how funny her Language Arts teacher was, stories of kids she met, riding the bus, fixing her schedule as she had two PE classes and no elective. What a great start to the year!

This week after dinner, we each made our top 10 things of Summer 2013 lists.

I remember once seeing a list of the biggest stressors in life. Moving. New Job. Death. Birth. Weddings. The crazy people we are, instead of just planning a wedding this summer, we added a little move. Or at least moving 10 minutes north seems like it should be a little move.

As reported a bit ago, Bailie is focused on school plans, a big change of scenery for the eighth grade. And this means we have to move. This summer. Hopefully before the wedding as school will start less than three weeks after the big day. And worst of all, this meant less hours to work on wedding plans. So the invitations were sent late. The flower hunting was put on hold. We didn’t make time to put together the event details, select the menu, write our vows…and a whole long list of stuff we didn’t even think about.

We started by scouring online sites for rental options. Learning as we go the Issaquah School District boundaries. Emailed with the school registrar. Learned the tricks of the trade on how to validate school. Drove by every location we could find online (a whole seven options) to see where we wanted to be. Reached out to set-up tours. Many times to no response. Found one house. Out of several applications, we were not selected. Found another house, a bit big for us but Bill started day-dreaming about the dinner parties he could host. Tried one more. Got it! And it is less than a two block walk from our favorite little produce stand, a decent meat market and a fish butcher that may make us happy.

What a pain disorganized property managers are. It seems so simple; first application in approved gets it. We sat down right there and filled it out. But she didn’t even have a pen; instead rummaged through the current occupants drawers to find one. Then she prattled on about taking over this property at the last minute and how she was leaving the next day on vacation. Should have been a sign. She loses documents (like deposits), sends crabby emails, goes on about how much is on her plate. You would think since we own two houses – she would be working us to manage our properties. However, not one interaction with her has even been average. Each time, she disappoints. But I will stop there, enough documentation.

We took possession on July 1, and began preparing to start the move through the holiday weekend. And that started with a trip to Home Depot for the important stuff: Flowers to add color to a very boring yard, patio furniture so we can begin enjoying the patio and other odds and ends for both the move-in and to prepare the condo for renters. The rest of the weekend is a blur…

And yes, there was enough kitchen in Bill’s belongings to make a complete dinner at the new house at the end of it all.

The next page in the moving book was orchestrated perfectly by me. Bailie had a swim meet on the other peninsula. A great time to move the rest! Bill conquered the rest of the move with the help of my parents. So we came home to a new bed the next day – and lots of stuff to unpack everywhere. Each night that week we either worked on cleaning the condo or unpacking and setting up our new home. And watering and fertilizing my growing flowers. It felt very productive! And somewhere in there, we got the wedding invitations sent out with our new address! And we made time for a tasting night and follow-up appointment to start planning the details of our wedding event.

The move almost seemed complete by the end of July as we had a few photos on the walls. But it really wrapped up when Bill’s family arrived on Saturday. We frantically hung photos on the stairwell, organized wine into both the “everyday” wine rack and the wine storage “cellar” and found homes for most of the last items (even if it meant a temporary closet). If we are ready for five guests, we must be moved in!

We have a girl in our house with a goal: Grow taller. She would prefer hitting six feet (she says). But she will settle for taller than me. And she wants to keep pace with her cousin Adrian. And she is behind.

But as she turned 13, she had just a quarter of an inch to reach the five foot mark. And she was swimming daily. And eating and eating. Then by mid-June the sleeping started. And the sleeping continued some days into the afternoon (only days where she was up at 4:10 to swim from 5 to 6:30AM).

By the end of June, she mastered FIVE FEET.

By the fourth of July, it seemed she was gaining momentum.

Then on July 13th, as she was at Emma’s working on her fair costume contest attire, I realized she grew again. In fact, she was taller than her Grandma. Her expression says everything (and good thing you can’t see my Mom’s face; she is not happy). 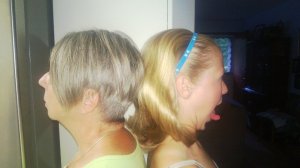 NOTE: She keeps growing, still trying to catch up with Adrian. Only time will tell.

Ahhhh, the ups and downs of sleep deprivation. Much emotion, chaos that ends in relaxation and wisdom. And the biggest surprise…wisdom came from my recent teenager.

Out the door for swim “Dream” seminar hosted by USA Olympian Ariana Kukos. Parents stayed for introductions and stories of her swimming career, and returned early for a chat with the her mother on parenting an athlete.

Now to the office:

Arrive at swim meet at 5:20, only 20 minutes late. Downpour. Thunder. And the pool is emptied. By 5:50, the meet is cancelled. Now on to the joy of traffic. Not home until 7. Quickly made soup…

And as we started to gather at the table, Bailie pulls out the dominos for Mexican Train. Relax. Breathe. Enjoy dinner and impromptu family time. At the icing on the cake. Final comment before bed from the teenage: “I am amazing and no one can take that away from me.” Now that is wisdom. And an inspiration for a simple poem:

Thunder. Down pour. Another clap of thunder.

Error: Twitter did not respond. Please wait a few minutes and refresh this page.

40fabulousthings
Create a free website or blog at WordPress.com.